The Pros and Cons of Period Underwear 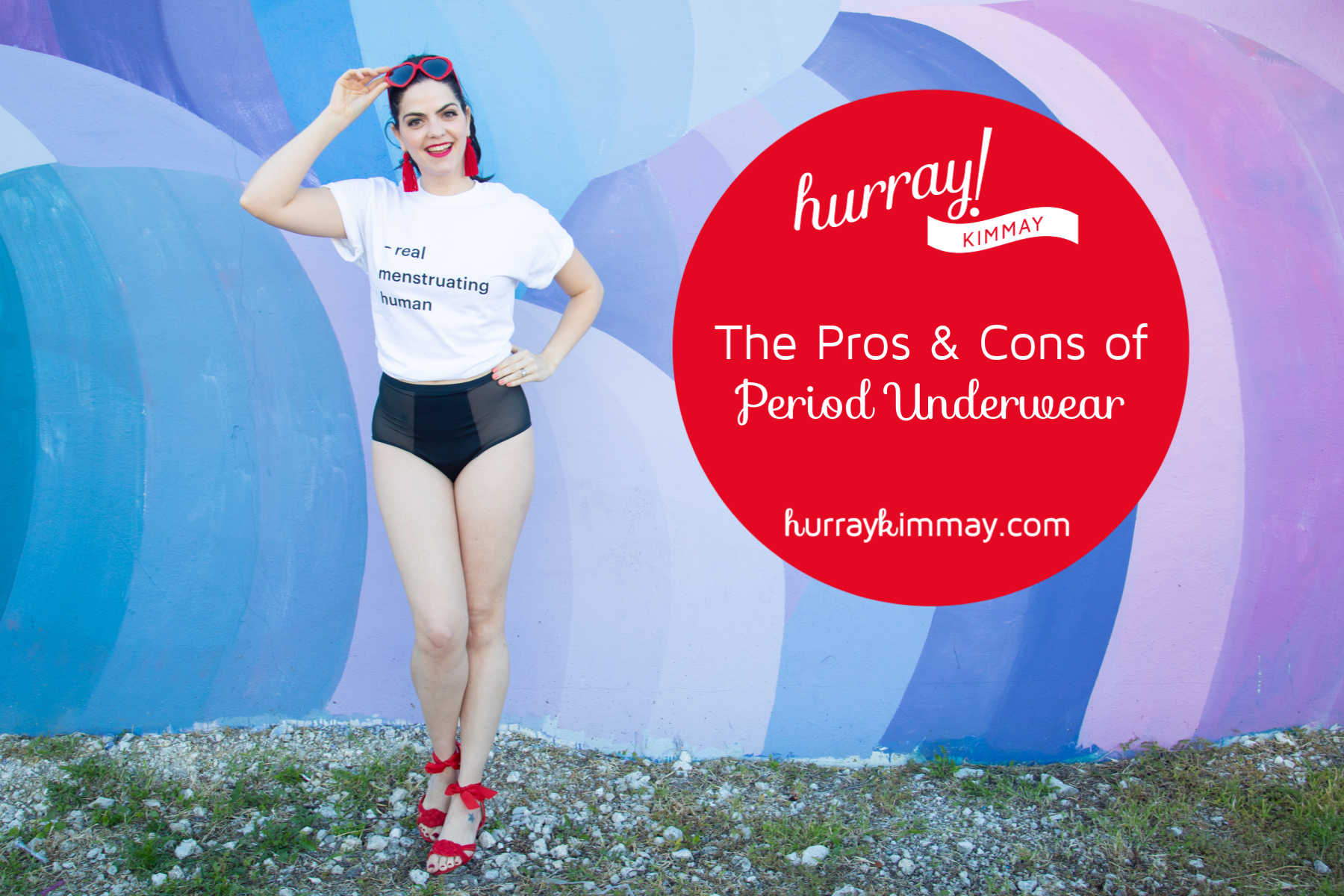 Hurray! It’s time for another Pros and Cons article on Hurray Kimmay! This time I’m helping you decide if period underwear really works, when and if you should try period underwear, and so much more. When I say period underwear I mean the technologically advanced styles that have built-in period and menstruation protection. These are re-wearable underwear that you use during your cycle, wash, and re-wear. There are MANY reasons to try them and they may or may not be for you. I’m gonna help you decide what works for you.

You may know by now that I like to think of Pros as “hurrays” and Cons as “what the heys!” The truth is, every person will have a different take on what is good or bad for them, so take these as a starting point and make your own informed, loving decision from there. OK? Hurray! Below are some general hurrays and what the heys along with some information on specific period underwear brands and styles. That’s right – I tried them for you so you can say hurray. Let’s get going!

Psst! Some of the links in this article are affiliate links or a brand partner. I always share my honest opinion to help you say hurray inside, outside, and underneath! 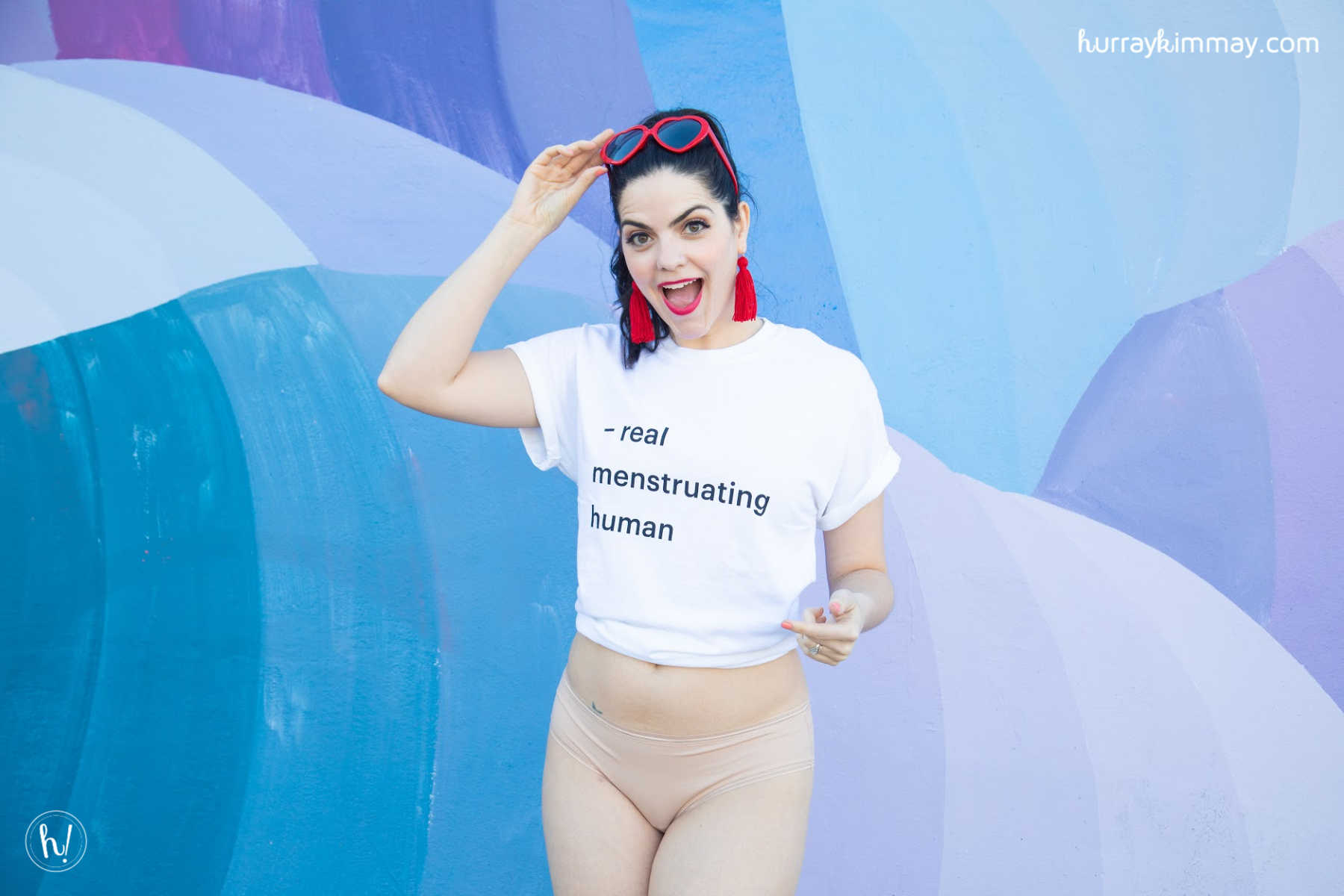 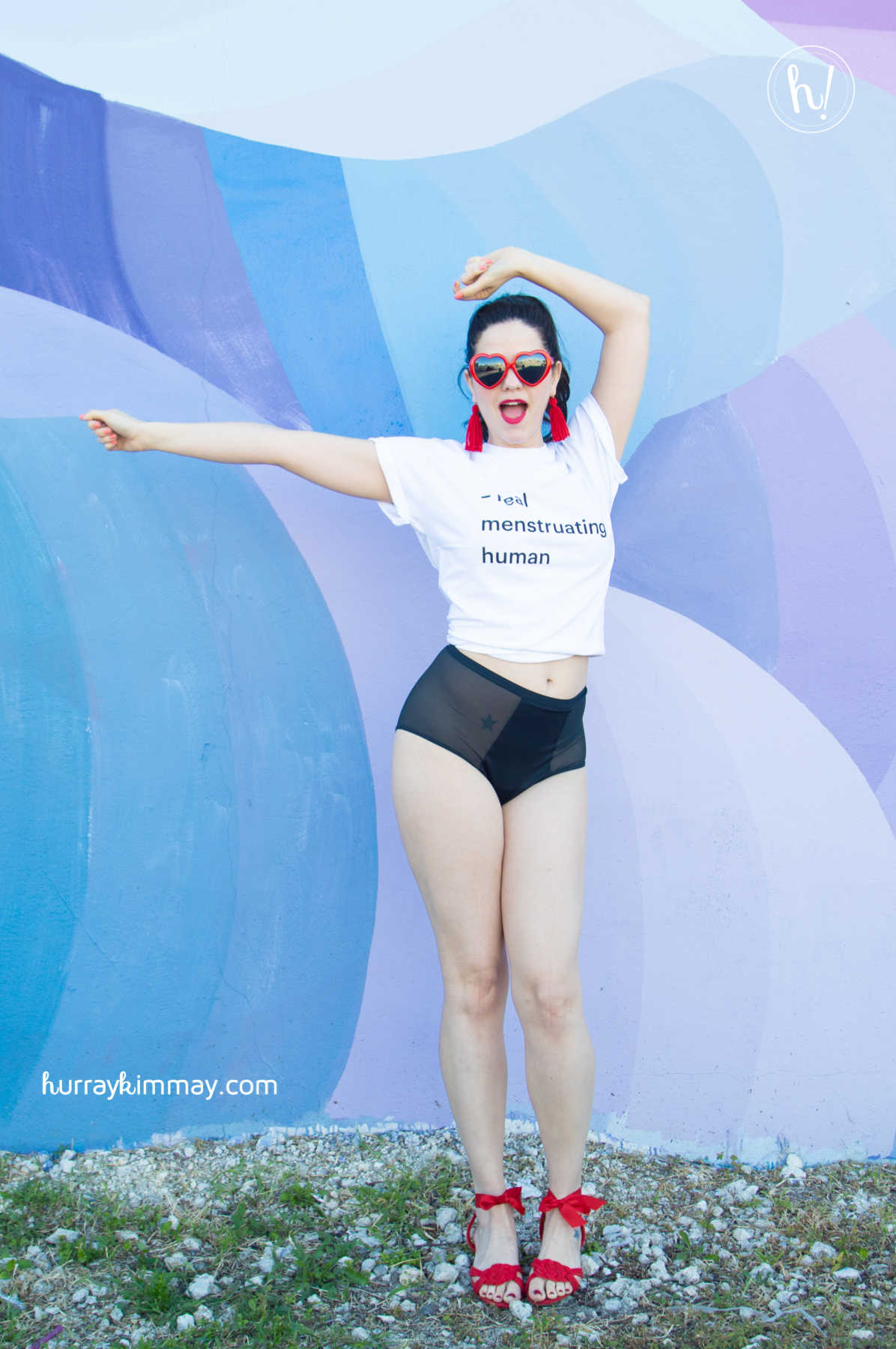 Cons and What the Heys!

Does period underwear REALLY work? There are many period underwear brands now! Some have been around for years and some are just popping up, and each are different. Below are three that I have tried personally with my honest take on how their styles worked for me and my cycle. Remember we are all different, and that includes our unique flows and preferences. Try out a few for yourself and see how it goes (and flows)!

This brand is my favorite. I don’t mind saying that, because I’ve been using Thinx underwear for years now and am in love. In fact, I’m a proud Thinx Leader and affiliate so these items were sent to me on behalf of the brand. I’m so thankful because I use these every cycle in different ways! If you want to try them yourself, shop my suggestions at SheThinx.com/Kimmay for $10 off!

Thinx underwear features four layers of protection: 1) moisture wicking cotton 2) odor-trapping lining 3) super absorbent material 4) leak resistant barrier. I love that this brand is very inclusive when it comes to genders and different needs. And if you are a New Yorker, like me, you may remember their advertising taking over the subway stations and making a BIG statement on breaking the taboos around menstruation and talking periods in public. Huge hurray for that. Their styles are simple, sleek, and sexy styles and available in various rises and cuts, in a size range of XXS to 3XL. Currently, most of their styles are only available in one neutral skin tone, or black.

My favorite styles for heavy flow are the HipHugger and the Hi-Waist (seen here). For my first heavy days I can totally trust them to hold up to two tampons worth of liquid. I also love the hi-waist for that extra coverage and support on cramp days, and the sheer sides are so sexy! 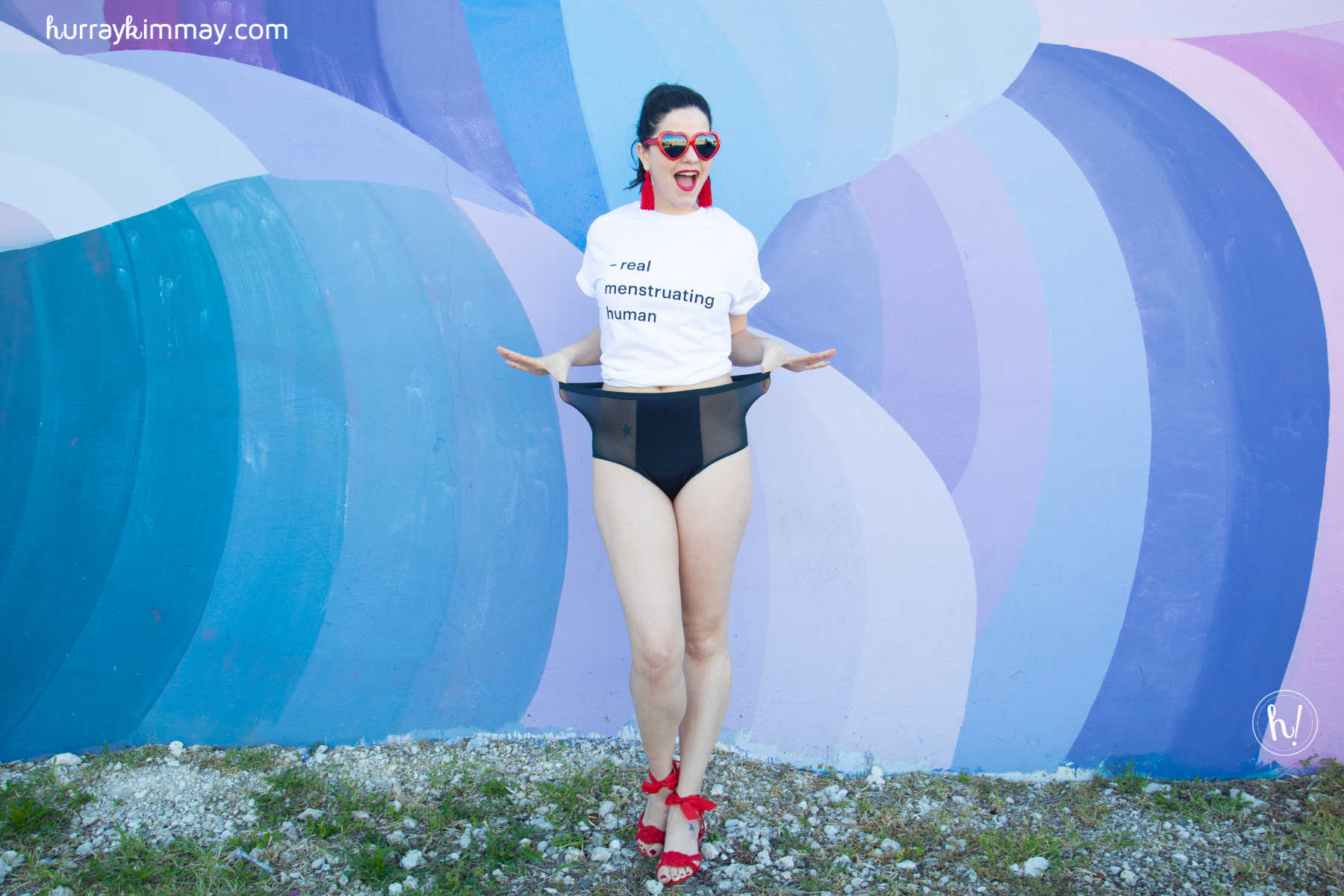 The Sporty style has a bit less coverage and absorbency, and a fun retro style look and stylish notch at the hip. This style can hold 1 1/2 tampons and cover your bum the most (which I feel is the most “secure” feeling when it comes to leakproof underwear). 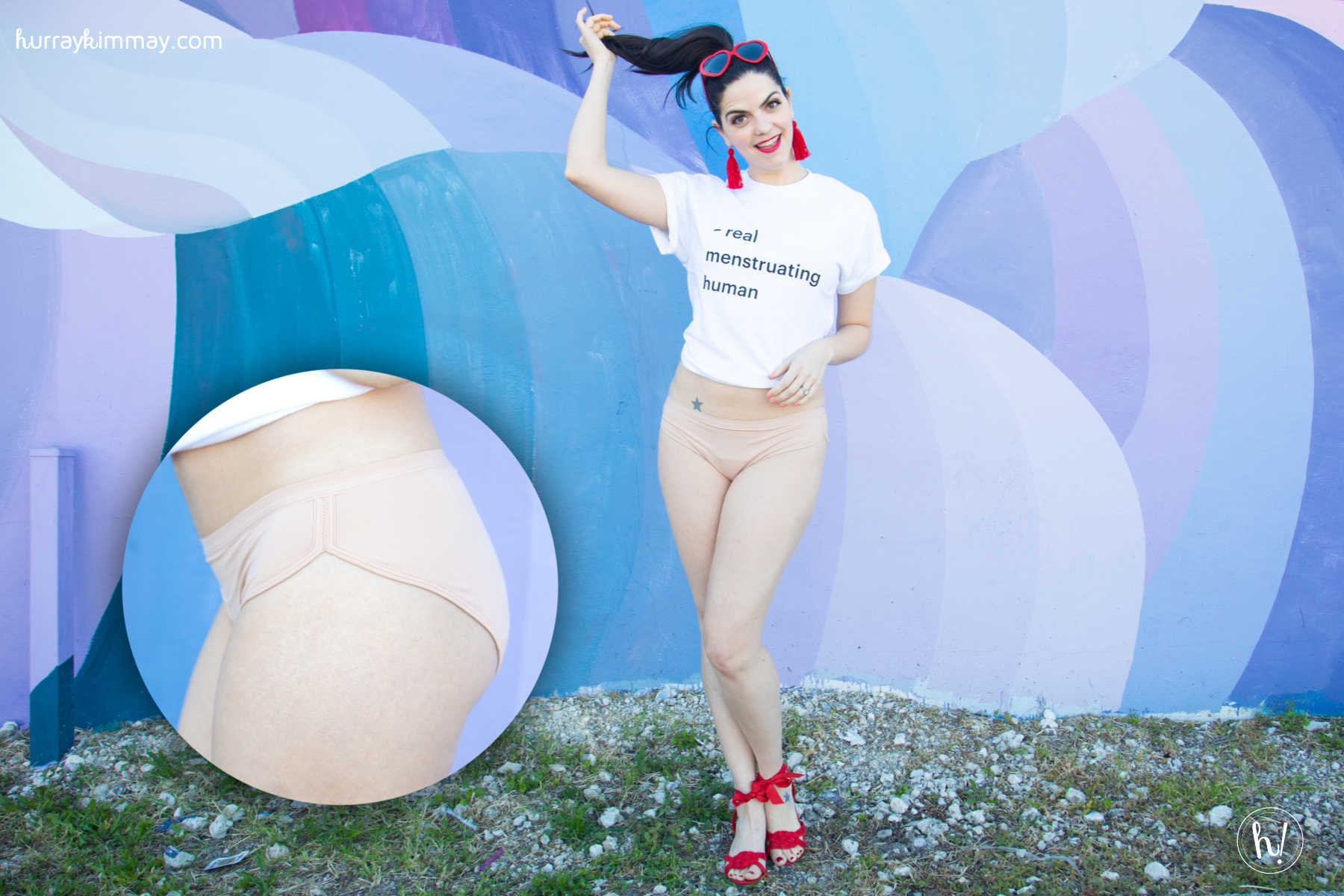 Cheeky can hold 1 tampon’s worth of menstrual blood and has less bum coverage, and the smoothest seams of all the styles. I tend to wear these on days when my flow is less heavy, or as backup for my tampon. I also wear these for discharge. 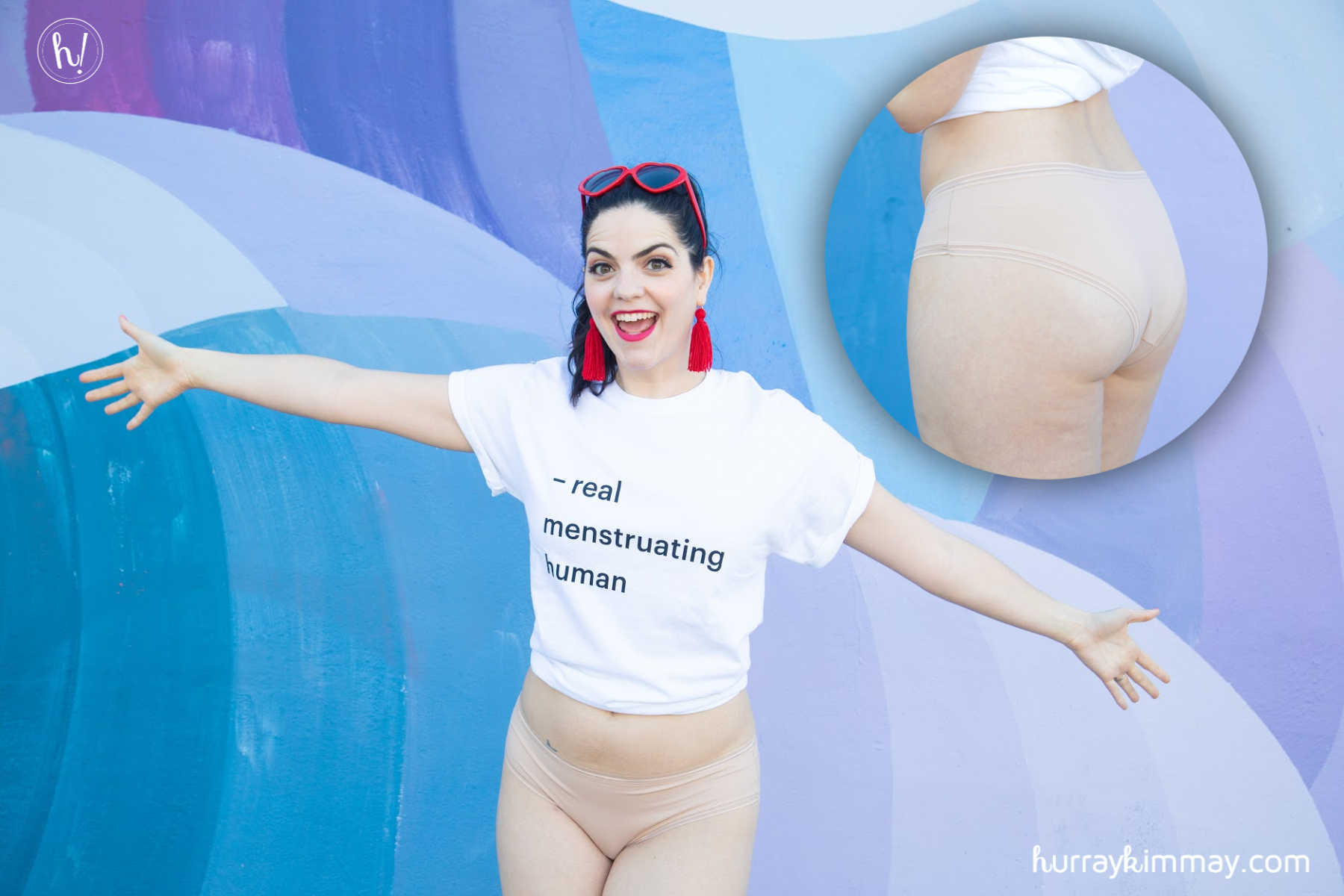 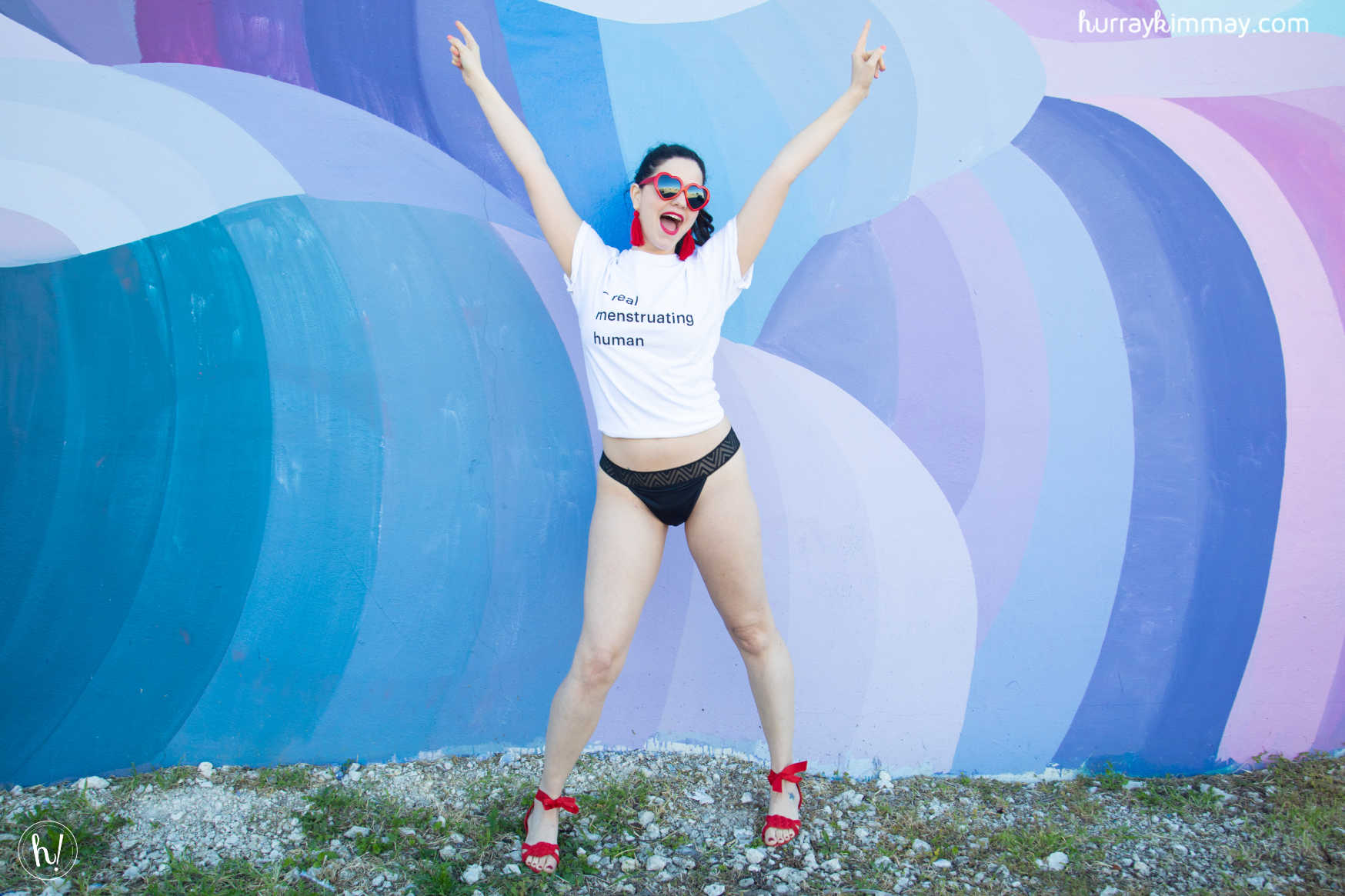 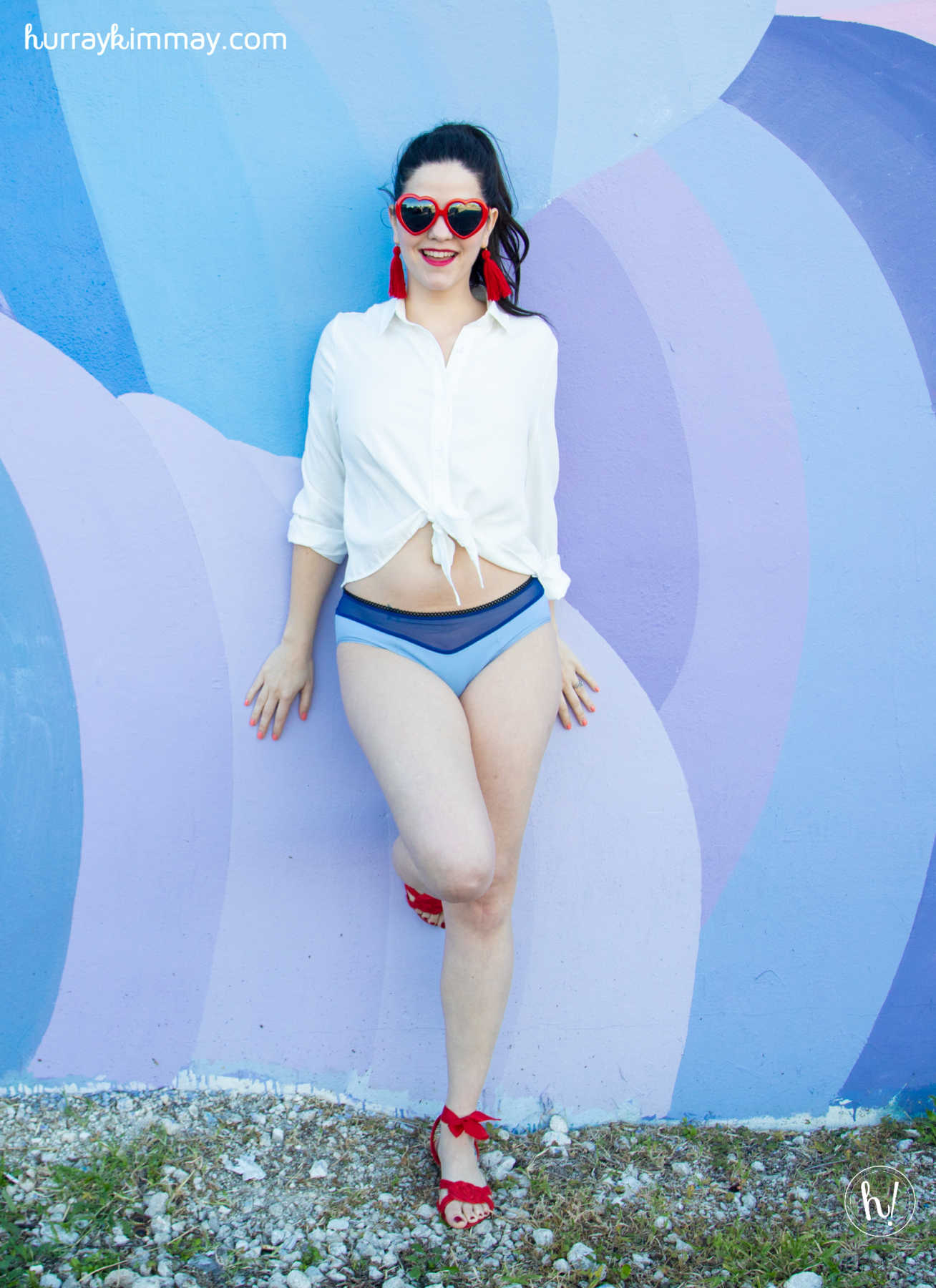 Dear Kate makes some great undergarments and activewear. They started with period panties (I remember them sending information to a retailer for whom I was working for years ago and the concept was way over my head at the time. So hurray to them for getting this out there early on!) and have expanded. They’ve also changed ownership so look for more changes, too. Dear Kate underwear have several layers of moisture wicking, odor and leak resistant material. 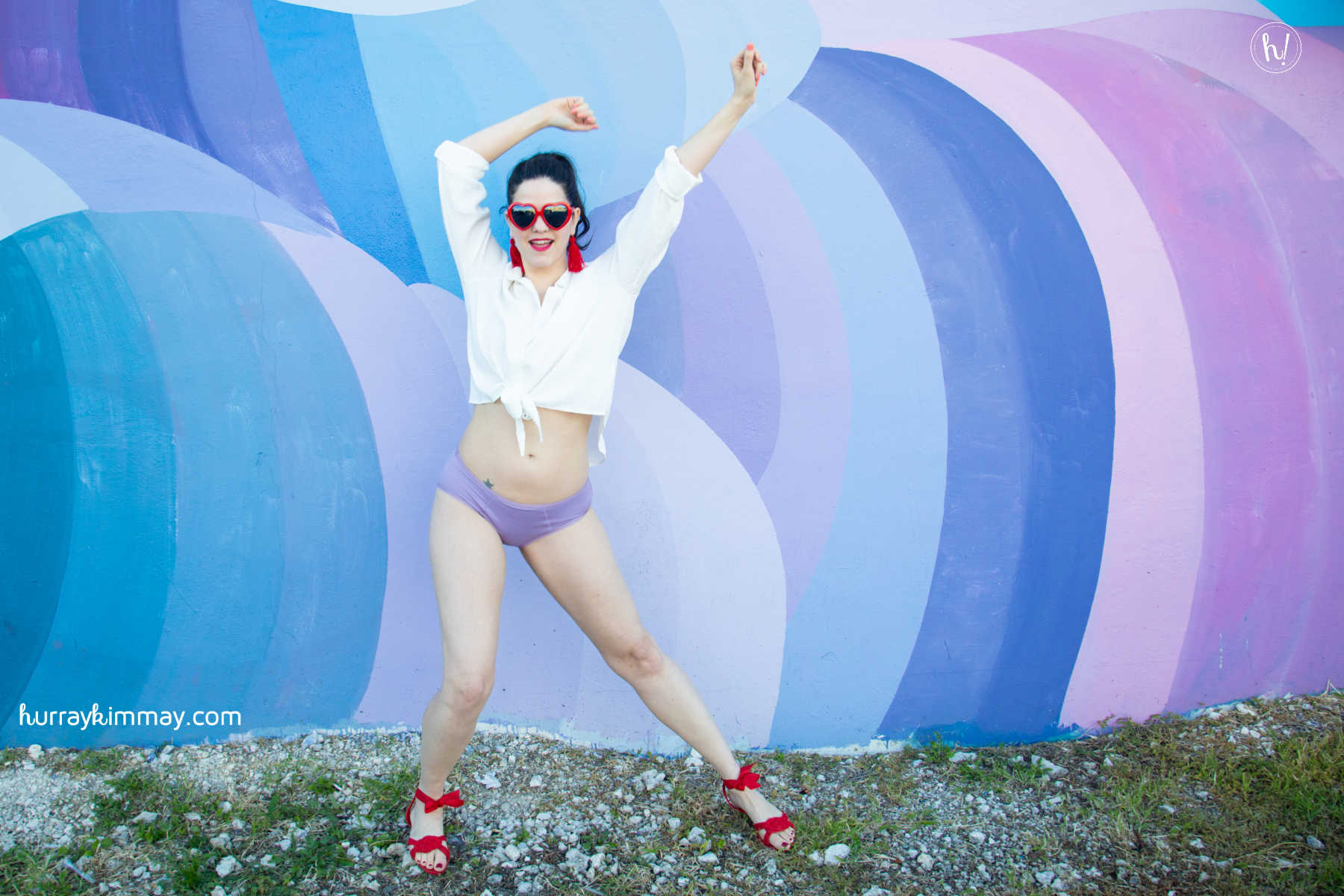 I bought my Dear Kate underwear myself and I tried out a few styles, including the two below, like the Nellie Hipster Full. I chose the “full”, as in it has more leak resistant coverage in the font and back. I’ve always thought that Dear Kate were meant for backup or light days only, but I just went to check and some of their information states that they can hold up to two tampon’s worth. Perhaps it’s changed since I bought mine, because when I put the Nellie to the test on a heavy flow day, the blood soaked right through. Eek! I do love that Dear Kate has some more adventurous styles and colors, though the options I tried tended to be the thickest of all. It’s worth noting that their current marketing and product images are very “real”, which I adore. I know big fans of this brand, but they’re not my go-to for catching my flow. I use them as backup with a tampon, or on very light days only. 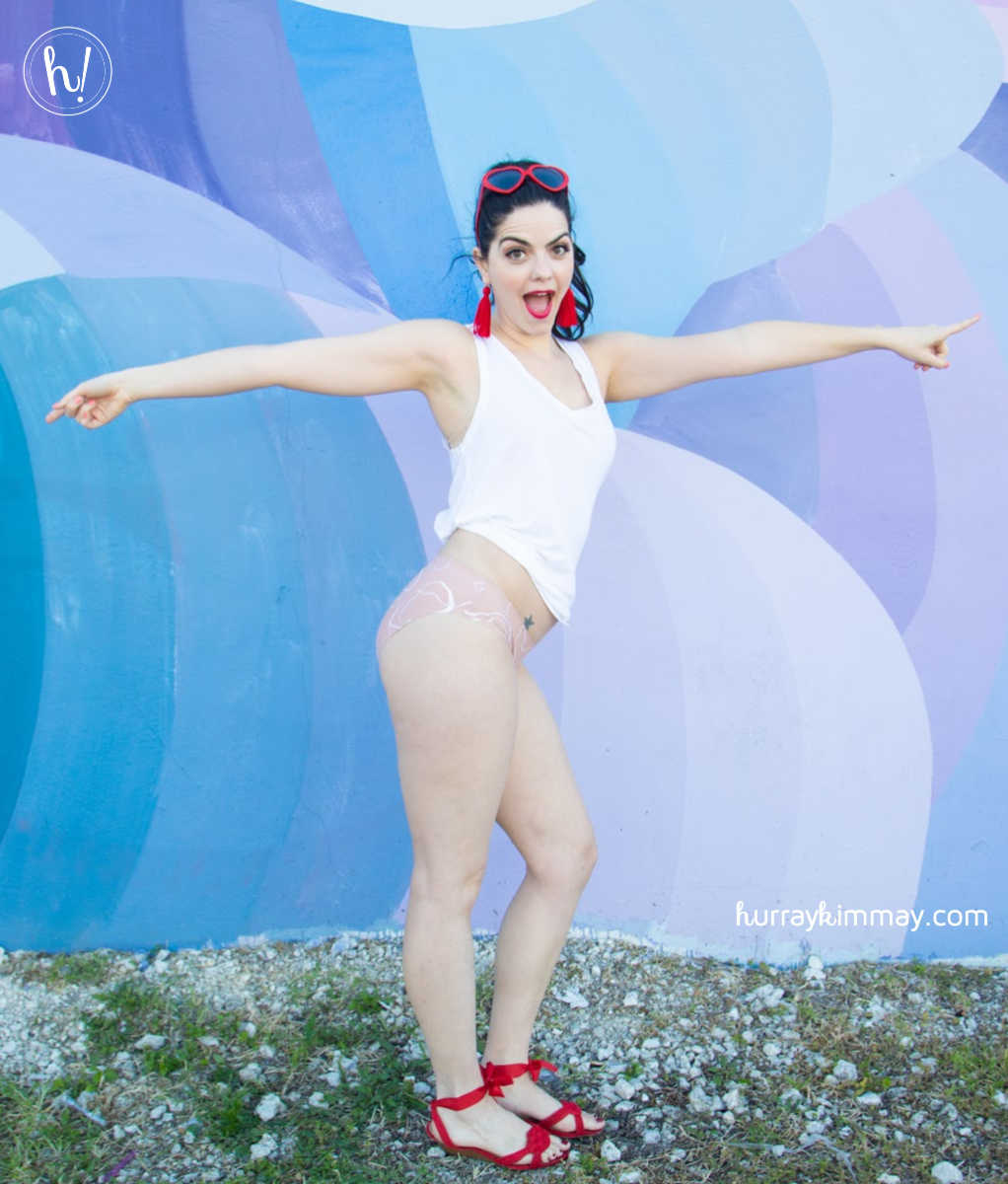 This Canadian based brand makes a whole host of innovative products, including “leakproof” protection underwear. This brand sent me some of the Athletic bikini and boyshorts to wear and share. Out of all the brands I tried this one is the thinnest, and the one with the most seamless edges which makes them great for wearing underneath tight pants or leggings. However, it’s also the one with the smallest gussets – meaning it doesn’t extend very far back or forward. Maybe it’s because I’m tall (or maybe I have a long vulva?) but the gusset didn’t go far enough forward for me. My flow tends to flow forward. So unfortunately, the absorbent part couldn’t do it’s job and I wasn’t able to test it out for heavy flow days. 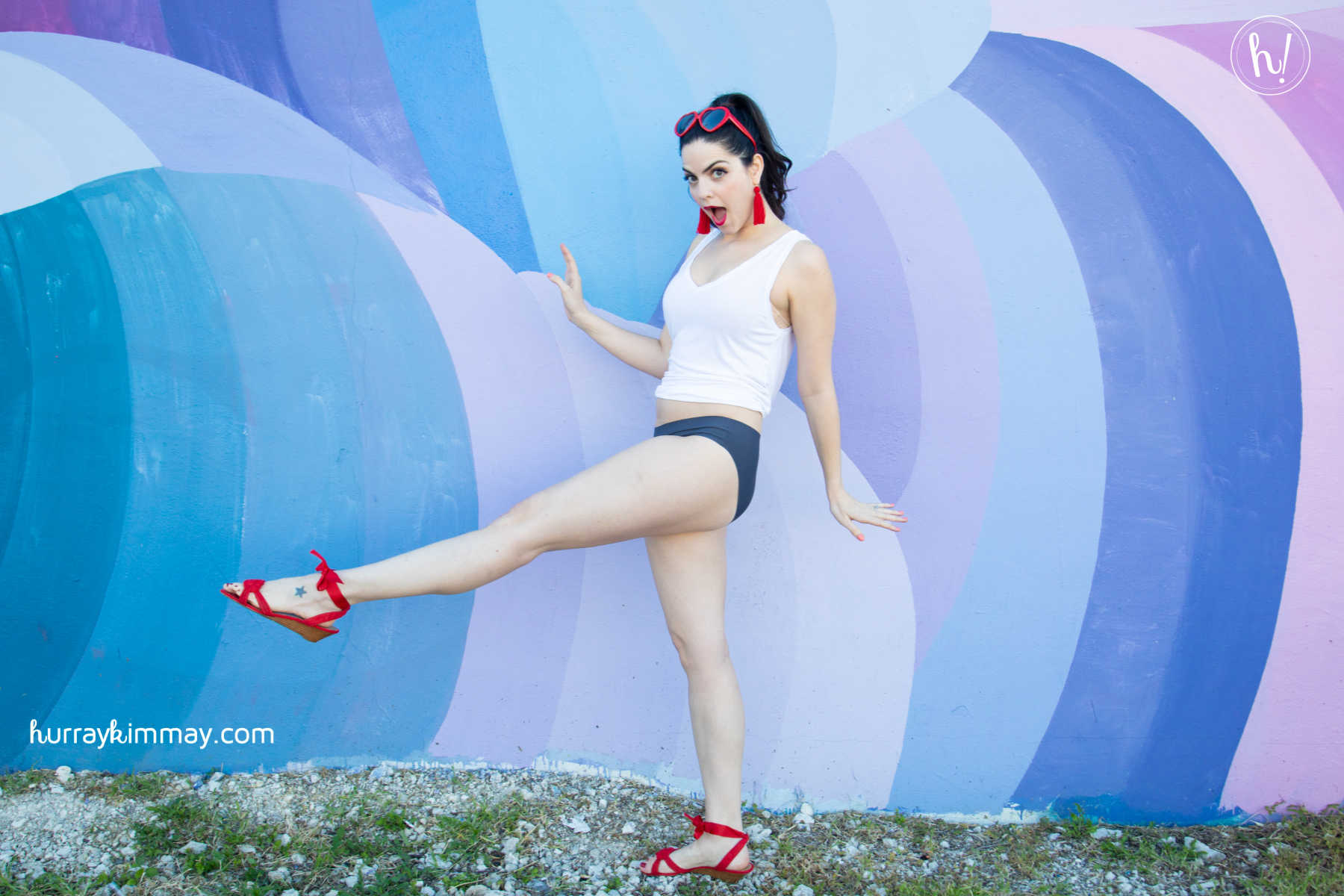 As of now, I use them as a regular seamless panty with a quick-dry gusset, and occasionally for discharge (but that also flows forward and I want more protection up there!). Available in sizes S to XXL, they also offer up just a few styles but some cool prints or colors here and there. PS: I would think that these could be great for avoiding sweat pooling down there during athletic activities, too!

Your Turn: Would or have you tried period underwear? How do you incorporate it into your monthly cycle? What benefits can you see from trying out this type of underwear? What questions do you have for me? Don’t forget to try some for yourself and tell me how it goes. You can shop at SheThinx.com/Kimmay to try my favorite Thinx styles (or choose your own) at $10 off! Leave a comment below and let’s say hurray together!

Credits: The images in this article are NOT AIRBRUSHED or altered 🙂 You’re seeing the real deal! They were taken by Becky Yee during my #HurrayVacay in Miami. Special thanks to Tobi for the long sleeved blouse, and to Thinx and Knixwear for gifting the underwear to wear and share!