I’m excited today. First, because it’s Monday and your dose of motivation is here. Duh. And second, because the 22nd Winter Olympic games are underway! With all the attention going to Sochi, it’s easy to forget that we just ended the NFL season here in the States. Many lessons were learned from THAT debacle. So even though football season is over for the year, professional football players are still practicing, and teams are still deciding who to draft. In the mix is Missouri’s Michael Sam. Without having to know anything more about him except that he’s a great player (SEC Defensive Player of the Year) and (according to my husband and ESPN) has great potential to get picked early on in the draft, what he just did should amaze you. Michael Sam came out as a homosexual.

Now, if we were talking Olympic sports, gay athletes are not all that uncommon, especially in what the world perceives as “girly” or “less masculine” sports like figure skating. (I’m talking to you Johnny Weir, you fabulous man, you!) But in the manliest of man sports ever, this is unheard of. It is statistically improbable that there are no gay athletes in the NFL, yet none have come out. What are they afraid of? Are they trying to avoid getting into the middle of the NFL’s history of foul mouthed teammate banter and bullying? Do they just feel that their sexual orientation is no one’s business? Are they unsure how the NFL and its fans (and sponsors) will feel about someone finally coming out? Do they think people will think they are less tough, or less of a man? Maybe it’a all of the above. As a heterosexual woman who does not play in the NFL, I can only speculate. But I can tell you as a person with many gay friends, that those who came out to me worried less about what I thought of them, because they finally accepted how they feel about themselves, and ultimately, who they are.

When you watch this video from ESPN, you’ll notice how Michael Sam unapologetically announces who he is: he is “an openly proud gay man”. Proud. The theme of homosexuals who finally reveal their sexual orientation to the masses, amidst possible ridicule and prejudice is “pride”. Having pride in who you are, unapologetically. Something that we can all learn from, no matter our sexual orientation.

Luckily for Michael Sam, he claims that when he came out to his Missouri teammates, that they took it well and rallied to support him. That doesn’t mean it was easy. He admitted that he was scared. When he says that telling another person that he’s gay “shouldn’t be a big problem”, he is right. It shouldn’t be. But for many people in America, and the world, it is a big problem to be gay. In fact, a microscope is placed on Russia during these Olympics for their anti-gay propaganda laws. And we can not forget that, should Sam get drafted into the NFL, he’ll be the first openly gay player. The first. Ever. That’s big. And scary.

Sam’s reason for being unafraid to admit this homosexually stems from his acceptance of himself: “I’m happy with who I am and  I know how to play the game”. Because he’d already told his teammates, and because scouts and most of the media already knew, he realized that the world would soon find out so he took it upon himself to be the one to tell his story. But, his willingness to share also stems from his past experiences. He has endured so many setbacks and tragedies that put this aspect of his life into perspective. He says:

“I endured so much in my past, so much tragedy growing up. Seeing my older brother killed from a gunshot wound. Not knowing that my older sister died when she was a baby and I never got the chance to meet her. My second oldest brother went missing in 1998, and me and my little sister were the last ones to see him and we pronounced him dead two years later. My other two brothers being in and out of jail since 8th grade and currently both in jail. There were some hardships, there were some tragedies and some adversity. Telling the world I’m gay is nothing compared to that.” 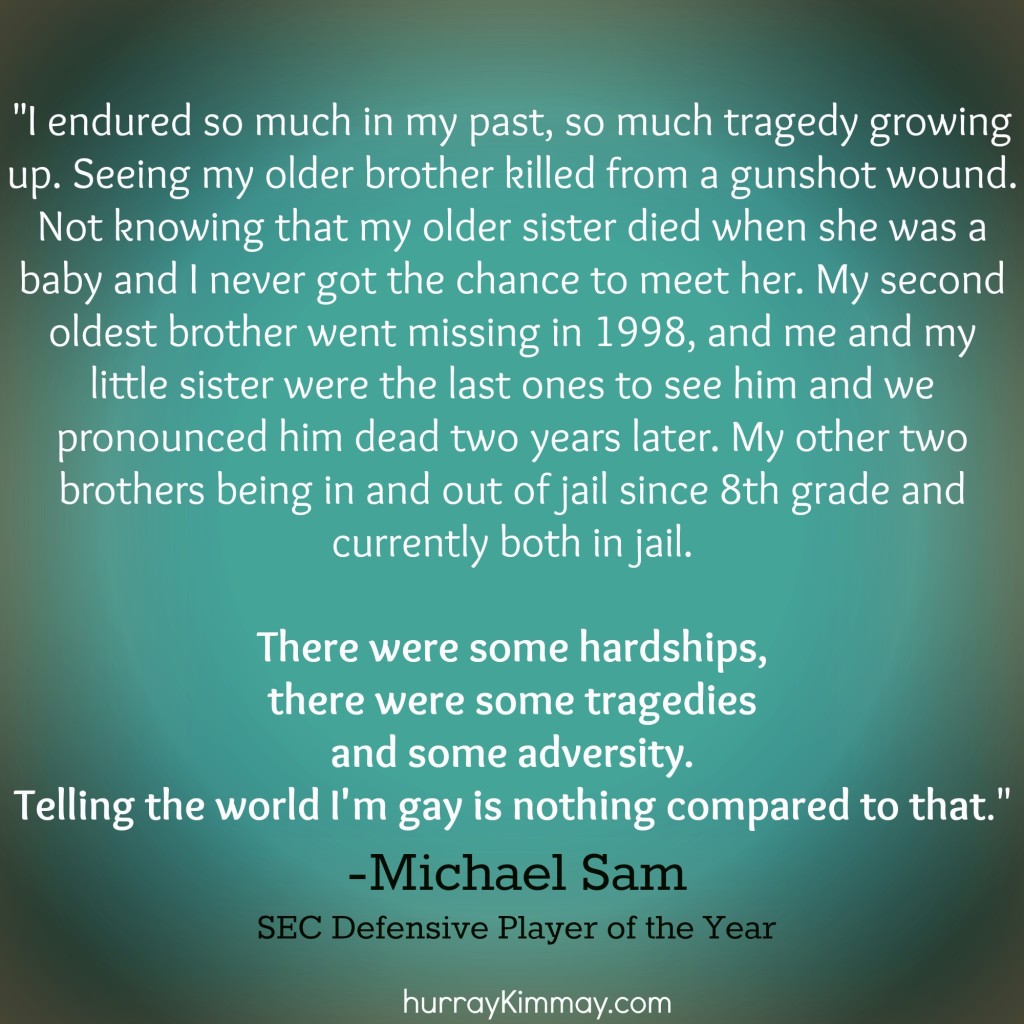 It’s all about perspective. Interviewer Chris Connelly prods him, “That past could have crushed you, Michael” to which he replies that it could have, and he could have been dead. Sam made the conscious choice to avoid the harmful path that his brothers took, to stay focused, and to put his energy into football. When Chris finally asks “Why are you the right person to be in the spotlight in this moment?”, Sam replies: “Chris I am not afraid of who I am. I am not afraid to tell the world who I am. I am Michael Sam, I’m a college graduate, I’m African American, and I’m gay.” He is composed, he is professional, he is sincere, and he is unapologetic. More than that… he’s a talented player. Should a mediocre player make such a bold statement, would it have the same impact? It’s a valid question to ask, but not one we’ll need to explore this go around.

Kudos to Michael Sam. Whether you’re straight, gay, man, woman, an athlete, a Mom, a dancer, an engineer… we can all learn from his brave and sincere announcement to tell the world who he is. I know I’m inspired. And I hope you are, too!