Hey Monday! Did you try any of the “be kind” suggestions from last week? I did. But I still have a few more to do! And that’s ok, you can try those out anytime, and keep on doing them all the time.

This week I want to share some of the NEW and exciting things I did on Sunday, and hope they can motivate you: 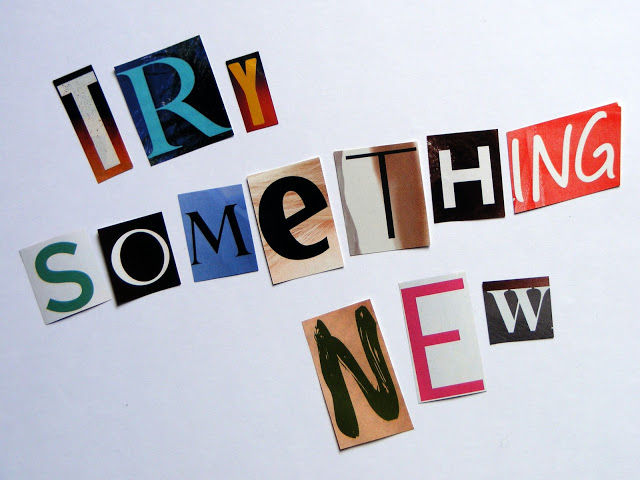 I know, these all sound pretty hippy dippy. I don’t really think of myself as this kind of person, so doing these things was really outside the box for me. And you know what? It didn’t hurt a bit. In fact, it felt pretty great.

The Vision Board Soiree was suggested by a friend, and I knew another friend who had gone to one. It’s far less cultish than it sounds. It was held in an apartment known as Casa Sabi. Two really positive women (who I literally met for the first time that night) were hosting. They had healthy snacks, wine, and lots of supplies: poster board, scissors, tons of magazines, glue, and glitter. We were encouraged to peruse the magazines and find photos and quotes that would inspire us, motivate us, and reveal our dreams and goals. I used to make collages like crazy when I was in high school and college, so I was pretty excited to do it again, and I ended up being the first one done. 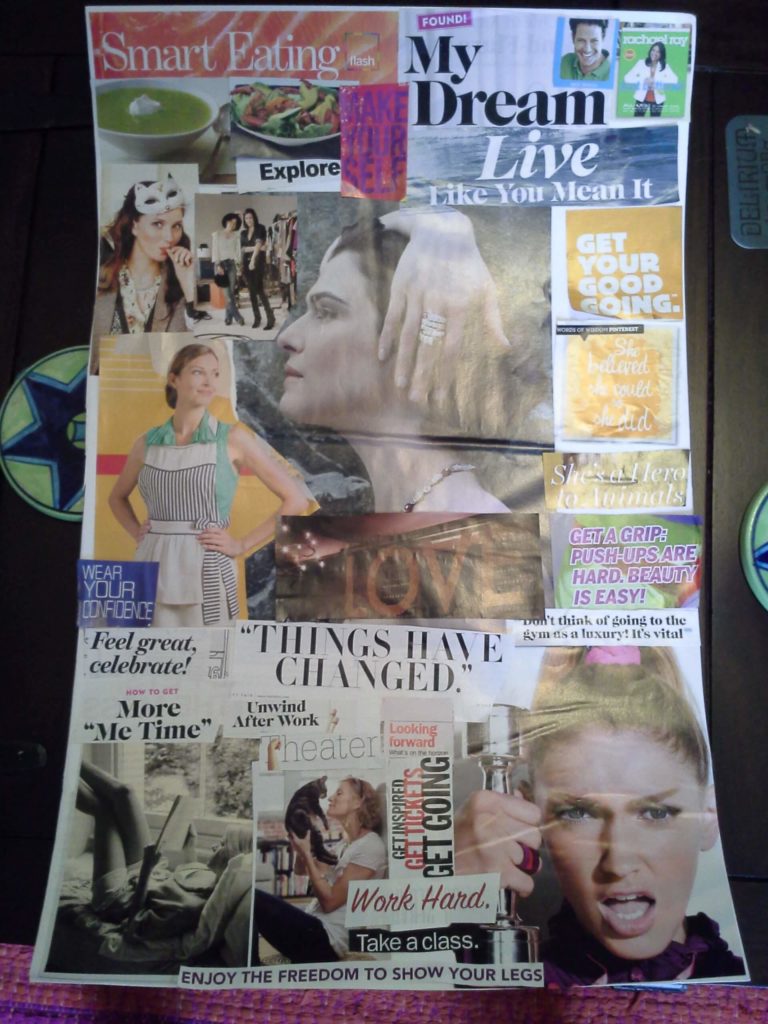 It’s not pretty, but for me, that wasn’t the point. I won’t spend too much time trying to explain the entire board, but basically it captures some of my dreams and goals including:

Honestly, it was a bit nerve racking, and also very liberating to share these dreams in front of total strangers. People were spread out all over the floor, clippings and scraps littering the ground, many of them drunk (it was St. Patrick’s Day, after all)… and they were so supportive! And I was so surprised at the beautiful and daring dreams that others shared, too. In fact, here’s a vision board poem that one of the guys in attendance wrote: 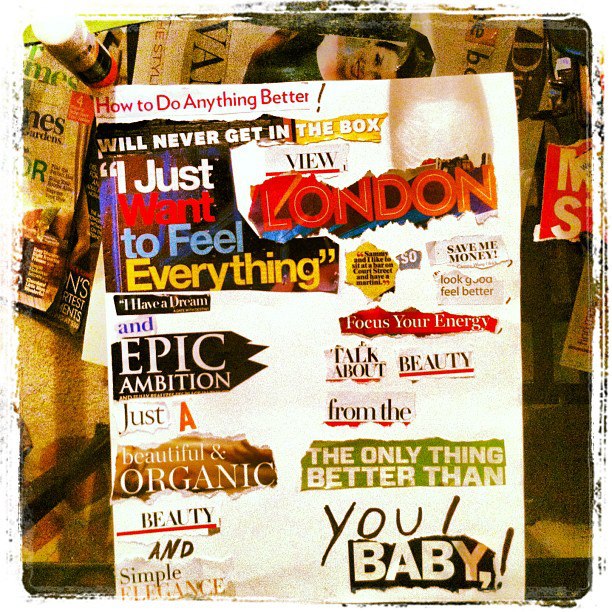 Pretty rad, right? And he read it with such elegance, too.

I highly suggest doing this in a social setting, but there’s no reason you can’t create a vision board on your own. Just tear out words and photos that mean something to you. For me, I had to keep reminding myself that these were for goals and the future – otherwise I would get caught up in things that currently defined me, or that I have always liked. Which is certainly OK, I’m sure – but wouldn’t have helped propel me forward in the way I was hoping.

I came home and shared my board with my husband. I actually had to tell him not to laugh at me. Though this is a non-serious exercise, it was actually extremely revealing. And even to the man that I love the most, it was frightening to admit my hopes. Mainly because… what if I fail? Now instead of just me knowing, he’d know too. Those people in that room will know too. So guess what: more reason to succeed! It’s motivating to me to have them affirmed by others, and to start the ball rolling with a public declaration of these goals.

I’m going to hang this board up on my wall, and check in from time to time to see how I’m progressing on these goals – and see if I want to add anymore. Have you ever made a vision board, or something like it? Share your story with me!